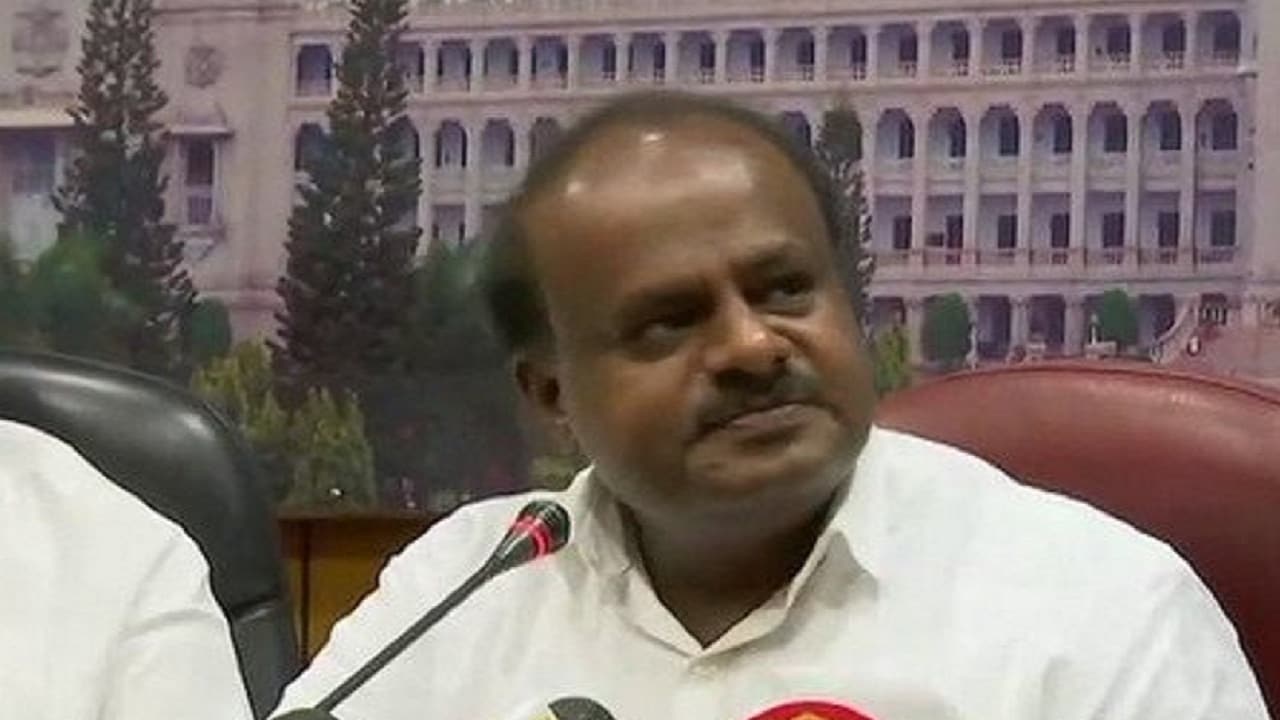 In the year 1573, the British city of Chester was blessed with a Mayor called Aldersey, who was like Karnataka chief minister HD Kumaraswamy.
One fine day, or one fine night, Aldersey’s daughter Ellen eloped through what was called Peppergate on the east of the city. Only after that, Aldersey ordered the gate shut. This led to the proverb about “shutting Peppergate after the daughter has gone”.
A similar, but more popular proverb is: “Locking the stable after the horse has bolted”.  This is equally true of what the Janata Dal (Secular) chief minister is doing, except that, not one but 18 horses have bolted in his case. We are, of course, talking about 18 MLAs—13 of the Congress, three of the JD(S) and two Independents.
File image of HD Kumaraswamy. Twitter @JDSforchange
After they dumped the Congress-JD(S) coalition, troubleshooters of the two parties are trying to keep their flock together, while offering those who have gone away a variety of temptations to return. But the rebels have found a more promising stable. A few might come back if Kumaraswamy is lucky, but that would hardly make his government stable.
Of the 18 rebels, 16 have submitted resignations from the Assembly, reducing the government to a minority, while the two Independents have quit as ministers and announced support for the BJP. Assembly Speaker KR Ramesh Kumar, a Congress appointee, thought he could stave off a crisis with the mind-bogglingly simplistic methodology of rejecting the 16 resignations.
Wednesday’s SC ruling crucial
Of them, 15 moved the Supreme Court seeking direction to Kumar to accept the resignations.
At first, the Speaker had said the resignations had not been submitted to him personally in the prescribed form. So 11 of them did the needful, but he is still not accepting their letters.
The Speaker also claims he needs to be sure the MLAs had resigned voluntarily and not under duress. How he can be sure of that without an investigation is anybody’s guess.
After hearing arguments on Tuesday, the apex court reserved its judgment on what the Speaker must do till Wednesday. If the court asks the Speaker to accept the resignations, the government will lose the vote of confidence on Thursday. If it rules that the Speaker can use his discretion in taking a decision, or decides to refer the issue to a bigger bench, the coalition will have time till Thursday morning to persuade at least some renegades to change heart.
Though the desertions began on 1 July, it was only three days ago that the Congress leaders woke up to the need for getting back rebels. Even earlier, it had always been a case of doing too little and too late when crisis after crisis blighted the coalition, formed in a hurry after the 2018 state Assembly election.
At the end of the tether now, the coalition’s crisis managers are using both blandishments and threats to save the government.
Kumaraswamy’s “voluntary” move to seek a vote of confidence on 18 July is part of this carrot and stick strategy, also compelled by BJP’s decision to move a vote of no confidence.
Thursday’s trust vote miscalculated
When Kumaraswamy declared on 12 July it would be “appropriate” for him to continue in office only after proving his majority, he intended to sound like the finest democrat to have ever walked this planet. But he managed to sound like the modern-day avatar of Machiavelli. He was apparently confident he would get back enough number of rebels to win the vote. By Tuesday morning, however, no more than a couple of them showed any signs of changing their minds.
Kumaraswamy can win the confidence vote if at least five MLAs backtrack on resignations from the Assembly and restore their support to the coalition. In the absence of that happening, this is how the arithmetic stands: When the resignations of 16 MLAs are formally accepted, the strength of the coalition would drop to 100 in an Assembly with a reduced effective strength of 208 and with a half-way majority mark of 105. The BJP’s tally stands at 107 with two Independents transferring their support to it.
And also, Kumaraswamy thought he could bamboozle MLAs into withdrawing resignations by threatening to disqualify them if they defied the whip to attend the Assembly on Thursday and vote for the government. That doesn’t seem to be working. The dissidents have taken the stand, rightly so, that the whip would be illegal because they have resigned.
To avoid disqualification under the anti-defection law, they have resigned from the Assembly instead of quitting their respective parties—Congress or JD(S)—and joining BJP. By doing this, they can become ministers in a new BJP government and contest by-elections on that party’s tickets later. But if they are disqualified, they can’t contest an election during the term of the current Assembly.
On the other hand, the coalition leaders claim that without the Speaker’s acceptance of resignations the rebels continue to be MLAs of the Congress and the JD(S) and so are bound by party whips and the law concerning disqualification. Though coalition leaders will have more time to woo rebels if the SC ruling goes in their favour, the game has gone past the stage of horse-trading. Most of the dissidents who left the Congress see no future for themselves if they return to the party. Those who left the JD(S) are fed up with the family-run outfit.
If the BJP is waiting in the wings to form an alternative government, the coalition leaders have only themselves to blame. No doubt, the BJP is fishing in troubled waters. But the waters became troubled in the first place because of constant, ugly bickering within Congress and JD(S) and between them.
The author tweets @sprasasdindia
Follow LIVE updates on the Karnataka crisis here

Vote Of No Confidence